Idaho ski areas achieved 2.15 million skier and snowboarder visits during the winter of 2020-21, exceeding its previous record of 1.88 million set during the pre-COVID winter of 2018-19 by 14.3 percent and extending what Ski Idaho president and Bogus Basin general manager Brad Wilson says is a long-term growth trend.

The COVID-19 pandemic brought the winter 2019-20 ski season to an early close and visits to Idaho ski destinations dipped to 1.63 million.

"It didn't take long for Idaho ski areas to respond to and rebound from COVID," Ski Idaho president and Bogus Basin general manager Brad Wilson said. "After social distancing for nine months, people were eager to get outside, and many of them discovered how wonderful it is to spend time skiing and snowboarding in Idaho's outdoors."

RRC also found that Idaho ski areas have enjoyed a slightly rising share of western U.S. skier and snowboarder visits, peaking at 6.2 percent in winter 2020-21, the most recent ski season for which data is available. The study also revealed Idaho ski areas account for a growing share of skier and snowboarder visits nationally, rising to 3.6 percent during the winter of 2020-21. 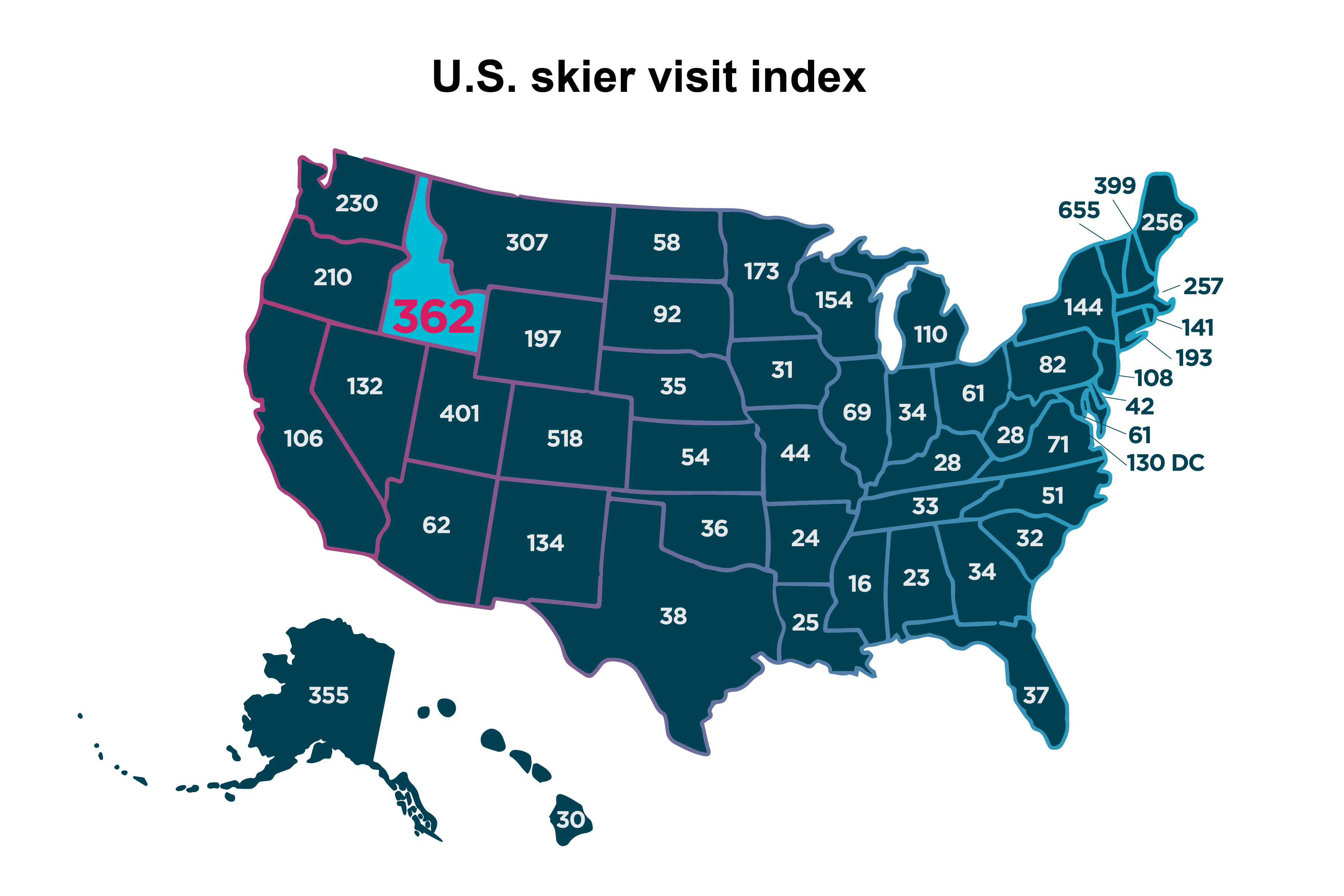 Idaho is the fifth highest state in terms of skier days per capita, earning an index of 362, which means Idaho residents enjoy 3.62 times more skier days per capita than average. The only states with higher skier visit indexes are Vermont (655), Colorado (518), Utah (401), and New Hampshire (399).

Skiers and snowboarders spent a total of $309 million in Idaho during the winter of 2020-21 -- $151 million, (49 percent) at Idaho ski areas and $159 million (51 percent) at other businesses. The industry also directly or indirectly generated $309 million in gross domestic product in Idaho, equivalent to 0.33 percent of Idaho's 2021 GDP. 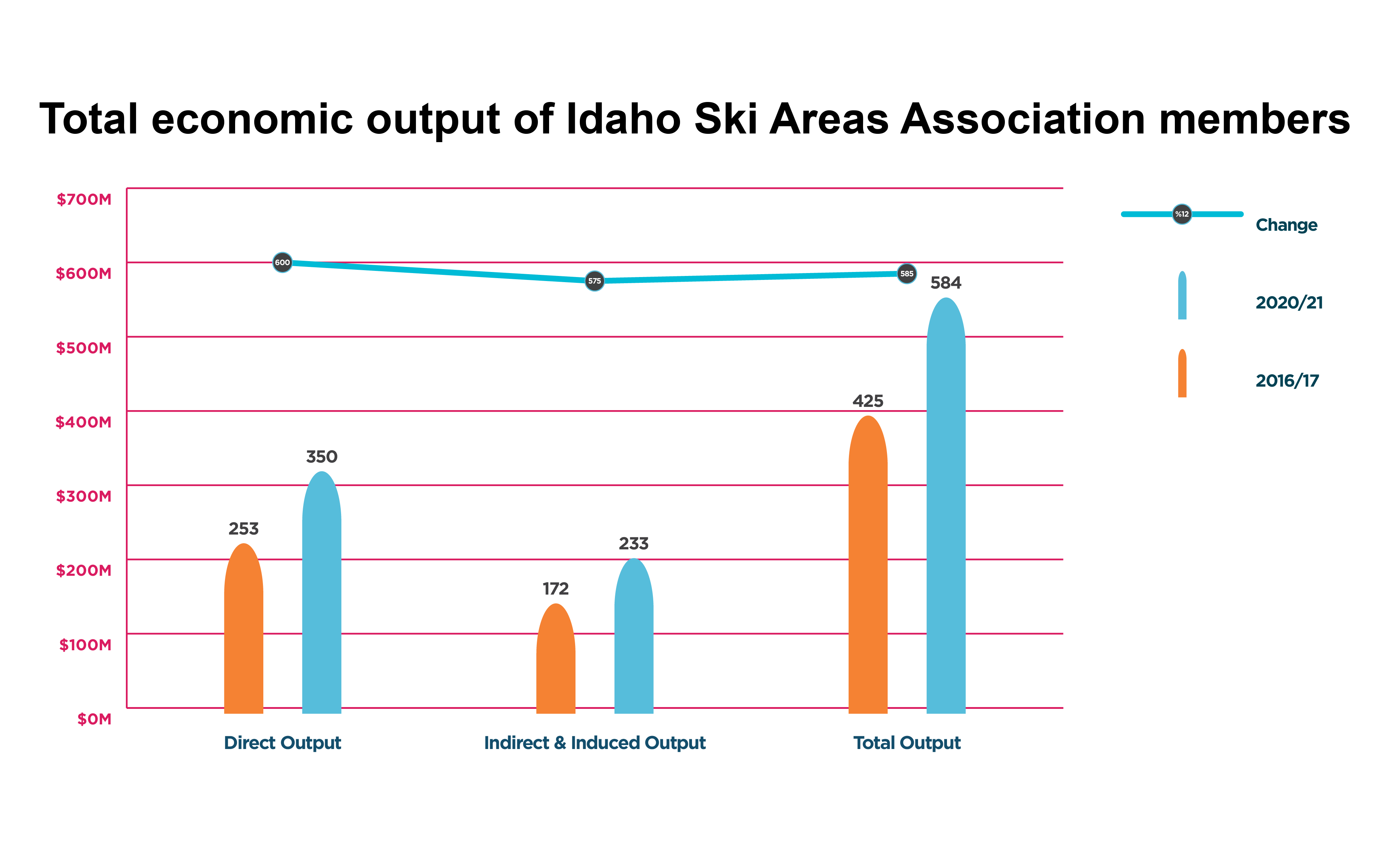 Between winter 2016-17 and winter 2020-21, Idaho ski area operators saw demand for lift tickets and season passes and rentals jump 41 percent and 29 percent, respectively. However, COVID-19 stalled the growth of lessons during that same period to 3 percent, while lodging and food-and-beverage operations each grew at a sluggish rate of 12 percent.

NEARLY HALF OF IDAHO SKIERS FROM OUT OF STATE 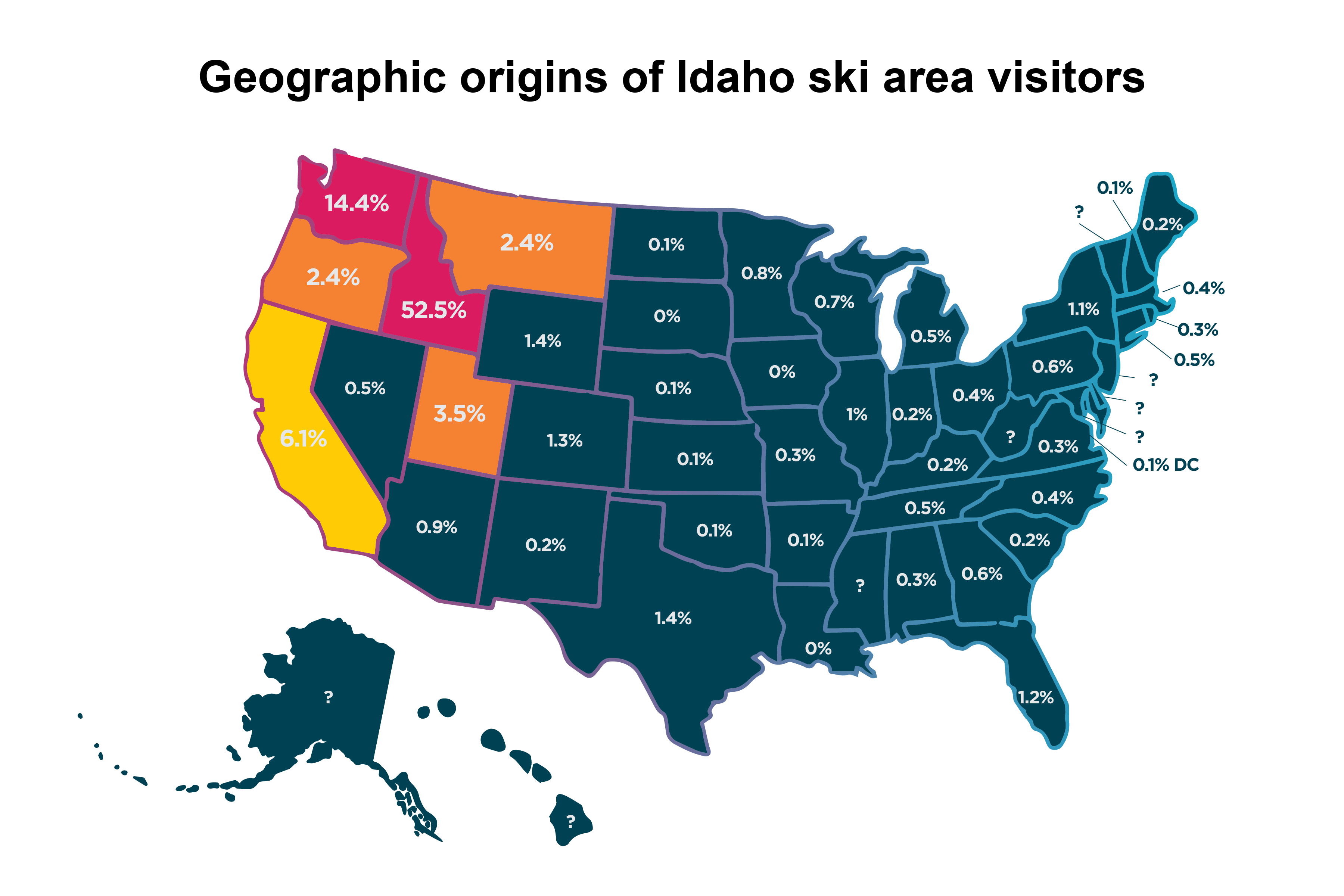 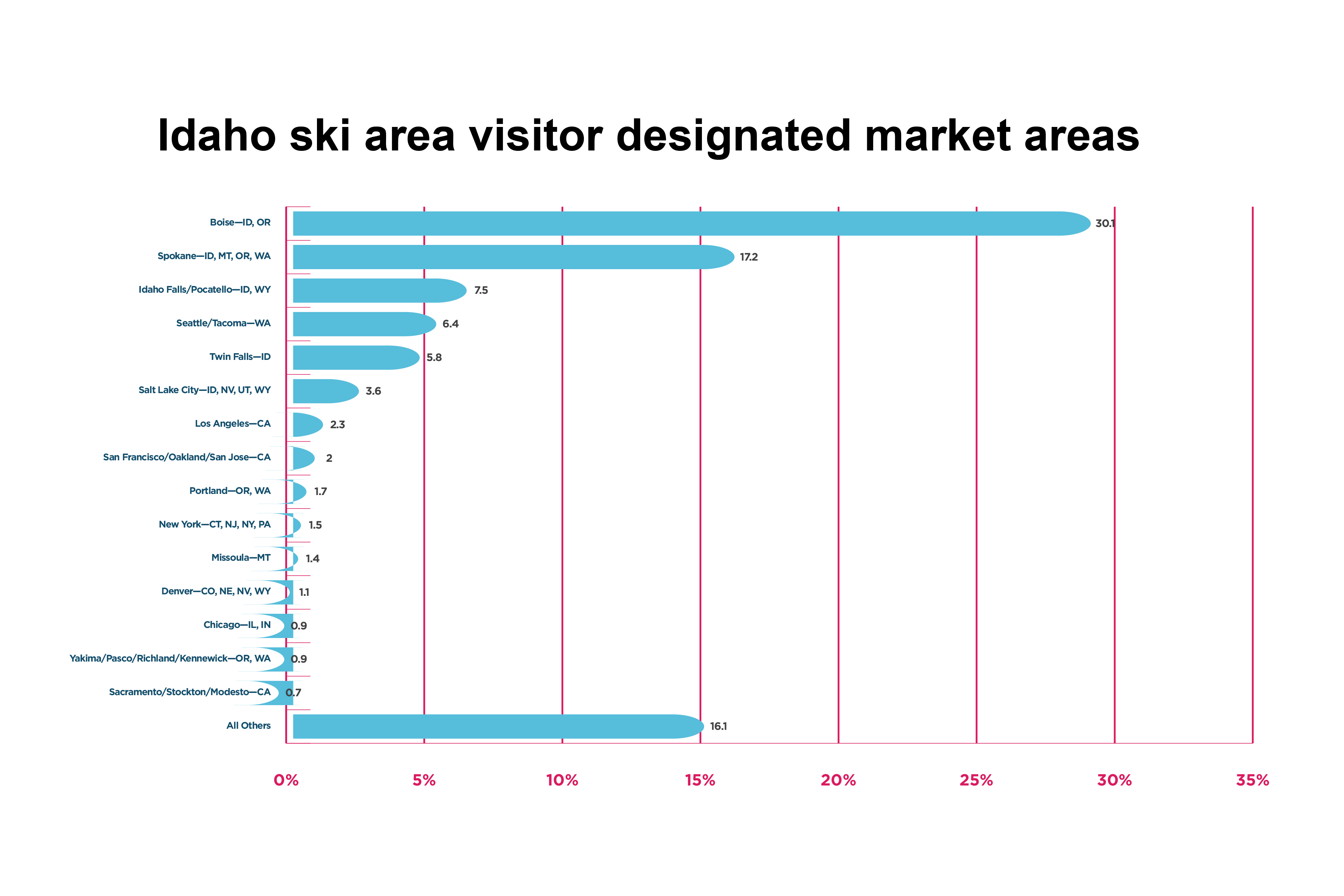 The greater Boise Designated Market Area accounted for nearly one-third of all skier visits that season -- 30.1 percent. The Spokane DMA, which includes a great deal of North Idaho, accounted for more than one-sixth of visits at 17.2 percent. The Idaho Falls/Pocatello, Seattle/Tacoma, and Twin Falls, Idaho, DMAs collectively represented another one-fifth of visits at 7.5 percent, 6.4 percent, and 5.8 percent, respectively.

Rounding out the top-10 hometowns of Idaho ski area visitors were Salt Lake City at 3.6 percent, Los Angeles at 2.3 percent, San Francisco/Oakland/San Jose at 2.0 percent, Portland at 1.7 percent, and New York City at 1.5 percent. Missoula, Mont., contributed 1.4 percent of visitors and Denver accounted for 1.1 percent, while Chicago and the Tri-Cities region of Washington State each proffered 0.9 percent. The area encompassing Sacramento, Stockton, and Modesto, Calif., represented 0.7 percent of Idaho's 2020-21 skier visits, and all other U.S. and international markets comprised the remaining 16.1 percent.

The bulk of Idaho ski area visits -- 62 percent -- were made by season passholders. Daily and multi-day passes comprised 33 percent of visits, with off-duty employee visits and comp tickets accounting for 3 percent and 2 percent, respectively.

About half -- 48 percent -- considered themselves advanced or expert skiers or snowboarders and nearly as many -- 44 percent -- ranked themselves as having intermediate abilities. Only 6 percent of visitors surveyed were beginners and only 2 percent were first-timers.

A little more than half of visits -- 56 percent -- were day trips and 44 percent were overnighters. Most overnight visitors -- 61 percent -- stayed in paid lodging and 11 percent stayed in an owned vacation home.

Ski Idaho's Wilson was delighted to learn Gem State ski area visitors tend to express high satisfaction with their experience. On a scale of 1-10 (with 1 being extremely dissatisfied and 10 being extremely satisfied), Idaho ski areas earned ratings of 9.5 in overall employee service, 9.2 in overall lesson experience, 9.1 in quality of grooming, 9.0 in overall food and beverage, 8.7 in overall value for price paid, and 8.4 in overall rental experience.

"Whether it's a world-class resort like Sun Valley or a mom-and-pop ski area, the quality of our on-mountain experience coupled with Idaho's genuine friendliness is unparalleled," Wilson said. "Combine that with our short lift lines and affordable lift tickets and you'd be hard pressed to find a better ski and snowboard destination than Idaho."