World Cup victory number 62 tasted pretty sweet for Mikaela Shiffrin after she put forth a commanding performance at the HomeLight Killington Cup Sunday in front of 11,000 fans. She won the first run by 1.13 seconds and extended her victory margin to a massive 2.29 seconds on a scrappy second run. With this victory, Mikaela continues onward with the strongest start she's had to a season in years. Considering she won a record 17 races last year, this is a notion that must have her competitors nervous.

The other women couldn't seem to figure out the surface today, and typical rival Petra Vlhova of Slovakia was second at Killington for the third time in her career, while Sweden’s Anne Swenn Larsson rounded out the podium in third.

Coming into Sunday, Mikaela was a bit nervous, but she was trying to stay focused on the task at hand. Perhaps, even, her grandmother - or "Nana" - was on her mind. Four years ago, Nana came to watch Mikaela ski at Killington for the first time ever, and she saw Mikaela win on home soil. It was a special visit with family, and nana even came up to the podium for the picture. Those memories are sweet for Mikaela, who got emotional during the post-race victory press conference speaking of her grandmother. 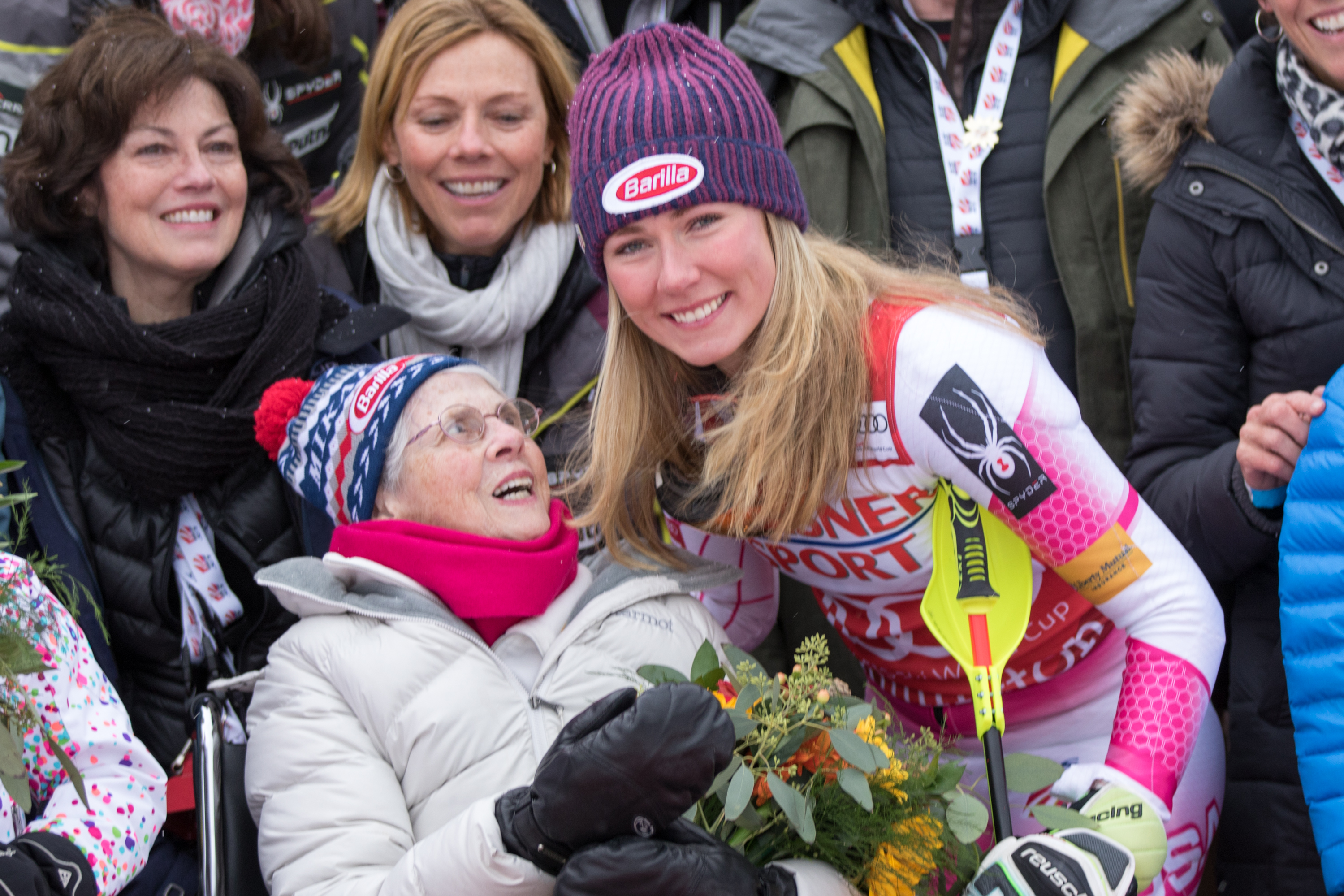 Mikaela celebrates with her "nana" after her slalom win in Killington in 2016. (Reese Brown)

"Nana has been on my mind every race I've ever skied," Mikaela said, teary-eyed. "I didn't want to feel like I was racing for Nana today, but in a way I'm always racing for her. She was such a big supporter and my biggest inspiration. I feel like honoring Nana is continuing to enjoy ski racing because I know that's what Nana would want. Joy, kindness, and gratitude were important to her. I try to embody those characteristics the best I can. Right now I'm just trying to remember her the best way I can, because she was an angel who walked this earth." Today Mikaela celebrated on the podium, once again with family - her ski family and her actual family, though there was a big void without Nana's presence and a warm smile.

"I actually ended up going with the same set-up in the second run as I did in the first run," Mikaela reflected, "and it's my normal set-up that feels the best in everything. In these conditions, it's tough because there were spots that were breaking and also some spots that were pretty slick. So to be able to have a ski set-up that's smooth in the snow that's rough and has enough grip in the snow that's icy is not easy. I really thought I was out of the course a couple of times. It was just fighting all of the way down. I really didn't think it was going to be fast. There were a lot of times on the course where I felt like I was on the limit."

Mikaela came out knowing that she had the best equipment on the mountain for these rough conditions, which she felt like was an advantage. Coming to the finish fighting, feels sweeter to Mikaela when she sees the green light. And, boy, did she see a green light. A 2.29-second margin is almost unheard of in a sport that's decided in hundredths.

"The record's keep going, don't they?" Mikaela laughed. "It's different from what Ingemar was able to do, or what Annemarie was able to do - to me, with these amazing racers, their records will last forever. It's a different generation, with different events. But the records are also a symbol of the work that I do and the work that my team does...the way that we all work together - it's like a family and we're just doing the best we can every day. When it pays off, it shows in these records, and making history like that is special, for sure. I hate to think that there are legend ski racers out there thinking their records are gone, and they will be forgotten. No one is ever going to forget Ingemar, or any of these legends, for that matter."

Paula Moltzan, who has been struggling with some nagging back pain "skier's back" went out today with the mindset that it was just two minutes...all she needed to do was be strong for two minutes. In what was an incredible run, Paula had top-10 speed before she sat back a little and got launched by the aggressive, responsive snow, sliding down the pitch and hitting the net. Thankfully, she got up and skied down and is OK. Teammate Nina O'Brien was also having a blazing run before she got into trouble on the bottom pitch and DNFd. Birthday girl Katie Hensien skied a fast top split but ended up DNFing. Keely Cashman and Foreste Peterson also started but did not qualify for a second run.

Total crowd size for Sunday was 11,000, bringing the weekend total to 36,500 fans - there were also 6,000 on Friday and 19,500 on Saturday. Saturday's crowd was the largest single-day crowd the Killington Cup has had to date.

Next up for women is the first speed series of the season, in Lake Louise, Canada. Jackie Wiles and Alice McKennis will make their return to competition after a year of being sidelined with injury, and Mikaela plans to ski in all three events - two downhills and a super-G - up in Lake Louise. From there, the FIS Alpine World Cup Tour travels to Europe.

"Let's get this party started!" Mikaela said when she asked if she was ready to fully dive in to the World Cup season and head to Europe. "I hope everyone's watching again this year, because I'm having a lot of fun and I hope it's fun to watch. Right now I'm having the time of my life, and I hope you are too."