After five years of prototyping and millions of vertical feet climbed, Tecnica is proud to introduce its first sub-1,000-gram boot collection: Zero G Peak. It’s a category the brand has patiently waited to join, because a hard rule was set in place from the very start: If it doesn’t perform on the downhill like a true Tecnica boot, the industry doesn’t need it. 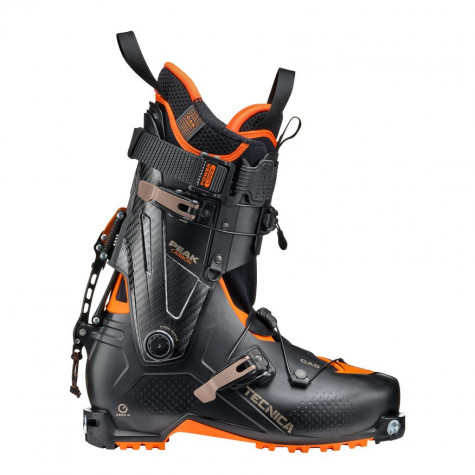 “When we build boots at Tecnica, there are three pillars we stand by, which are fit, performance, and customization,” says Tecnica’s North American Product Manager, Christian Avery. “So when we enter a category, we ask ourselves if we can be true to those three pillars and do something genuinely useful for skiers. We also ask ourselves if we can pivot the status quo. And with the Zero G Peak, the answer to both of those questions has been a resounding ‘yes.’”

When compared to the grander sub-1,000-gram boot market, the biggest differentiation point with the Zero G Peak collection is its overlap design. Much like a traditional alpine boot, and Tecnica’s successful Zero G boot collection, this overlap provides stability and drives powerful, confident turns. And while most sub-1,000-gram boots have very limited customization options—if any at all—the Zero G Peak offers a customizable CAS liner-shell system.

“We’re not coming at this from the skimo and race side of the industry,” says Avery. “Having a background in more hard-charging overlap boots, we made performance our number one priority from the start. Obviously this is an extremely light boot that walks remarkably well, but putting performance first instead of leaving it as an afterthought behind weight has really worked out well for us.”

Prioritizing performance is seen everywhere else throughout this boot, as well. Unlike many race-inspired boots with one buckle made to save seconds, the Zero G Peak offers a more traditional catch-cable system as well as a heavy-duty walk-mode lever taken from the original Zero G system that provides an extra stable backbone for the downhill. The liner’s gator is also glued from the inside, as opposed to competing gators which are loose and unglued—further adding to that snug and stable fit Tecnica is known for.

With so much performance talk in mind, the lightness and walkability of this new collection can’t be overlooked. There are three models: Zero G Peak (980g at 26.5), Zero G Peak W (900g at 24.5), and Zero G Peak Carbon (990g at 26.5). All three boots share the same carbon-grilamid construction and combine to fit a range of skiers sharing a desire to move fast uphill and ski confidently downhill. The Zero G Peak Carbon version includes a carbon cuff for those seeking a little extra power and stability.

With nearly 100 years of boot-making experience, entering the sub-1,000-gram category had to happen the right way for Tecnica, no matter how long it took. Fortunately, anyone who steps into the Zero G Peak line will find that it was well worth the wait.