Greek Peak Mountain resort is progressing in its efforts with over $1.3 million in snow-making infrastructure and lift upgrades projected to be completed by the start of the 2022-2023 ski season.

In total, the installation of over 9,000 feet of new water pipe and 5,000 feet of new air- line will be completed ahead of the new ski season, while brand new snow-making lines will be ready to go on four trails: Stoic, Elysian Fields, Karyatis Way, and Mars Hill. A new midway pumphouse is also being installed that will have two new pumps bringing total water output from 750 gallons per minute up to 2,000 gallons per minute in that area of the mountain.

Wes Kryger, president of Greek Peak Mountain Resort, lauded the upgrades as a continued commitment by ownership to add to the exceptional ski experience Greek Peak offers its guests each year.

“Investments like these are significant and they’re part of what has made Greek Peak a regional skiing destination for so many years,” said Kryger. “Our focus continues to be on the mountain, the resort amenities, and the overall guest experience.”

In addition to the snow-making upgrades, Electra, a natural-snow ski trail is returning this coming ski season. Not active since the 1980’s, Electra is a natural snow trail nearly 2,000 feet long with 300 feet of vertical that runs parallel with Zeus. 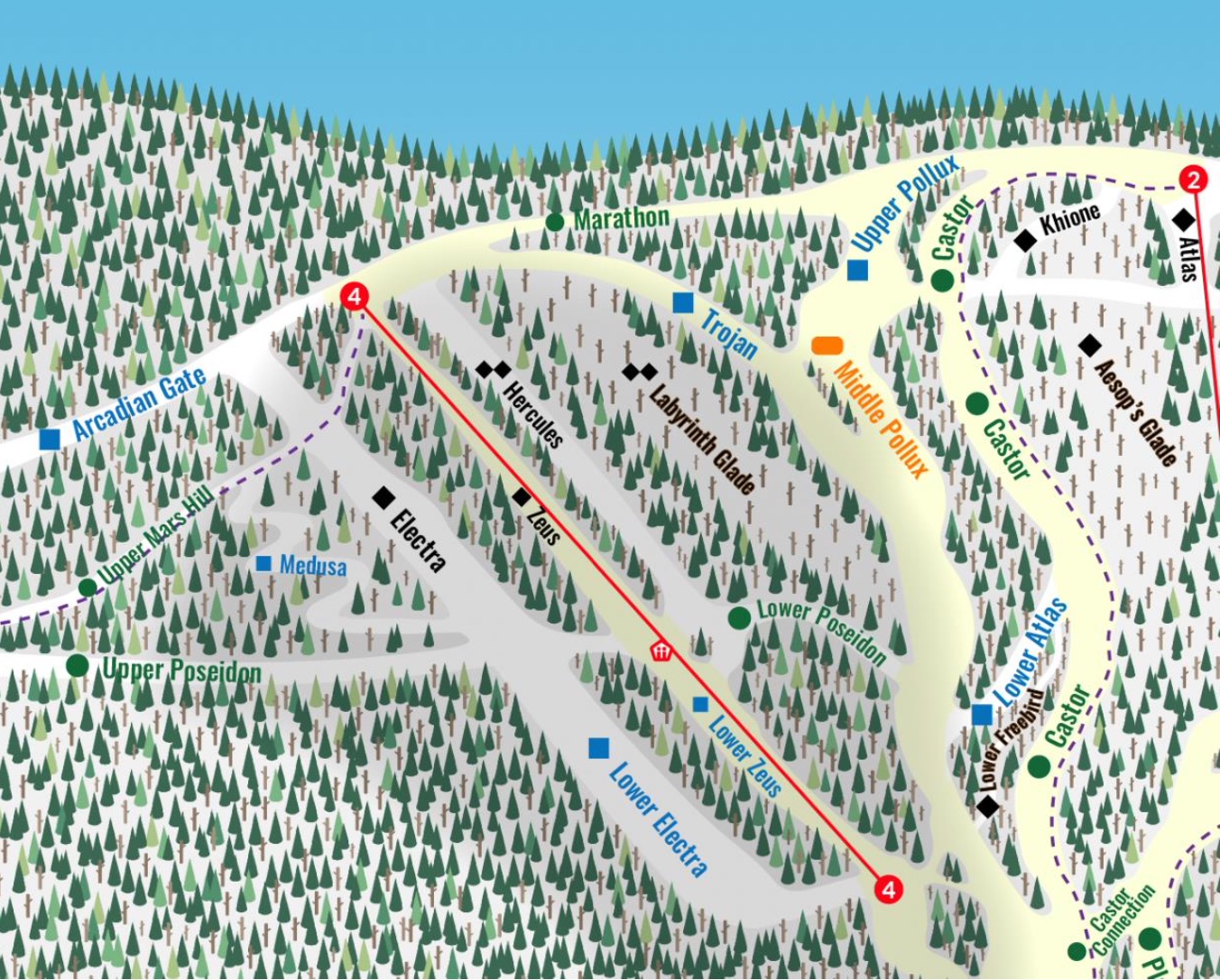 Another ski trail was recently designed, as well, and Greek Peak reached out to its ski enthusiasts via social media for input and assistance in naming it. After all the discussion and tallying up the votes, it was decided that a female character from Greek mythology would join the pantheon of Greek heroes on the mountain. Medusa will be a blue run that “snakes” through the woods between Electra, Upper Mars Hill, and Upper Poseidon. There are various rollers and banked turns throughout the trail, and the sides are gladed to provide an approachable way to learn tree skiing. A smaller ski trail, Khione, which starts next to Aesop’s Glade and is in between Castor, Epicurus, and Atlas, will also join the growing and much improved skiing experience on the mountain this coming ski season.

Greek Peak Mountain Resort also recently announced the replacement and upgrade project for Chair 3 is on track, as well, for the coming ski season. Chair 3 currently serves the Alpha slope of the mountain and will be upgraded to a triple-chair to better serve the growing number of new skiers coming to the resort.

“If there was anything positive that came from the pandemic, it’s the number of new skiers who came outside and took to the slopes to learn how to ski at Greek Peak,” said Wes Kryger, president of Greek Peak Mountain Resort. “The replacement of Chair 3 enables us to serve many more new and beginner-level skiers on Alpha and speaks volumes to ourcommitment to making Greek Peak a lifelong, family destination.”